The Frozen Space of Ego

“Fundamentally there is just open space, the basic ground, what we really are. Our most fundamental state of mind, before the creation of ego, is such that there is basic openness, basic freedom, a spacious quality; and we have now and have always had this openness. Take, for example, our everyday lives and thought patterns. When we see an object, in the first instant there is a sudden perception which has no logic or conceptualization to it at all; we just perceive the thing in the open ground. Then immediately we panic and begin to rush about trying to add something to it, either trying to find a name for it or trying to find pigeonholes in which we could locate and categorize it. Gradually things develop from there. This development does not take the shape of a solid entity. Rather, this development is illusory, the mistaken belief in a ‘self’ or ‘ego.’ Confused mind is inclined to view itself as a solid, ongoing thing, but it is only a collection of tendencies, events.”– Cutting Through Spiritual Materialism

With any kind of spiritual practice, you need to have a basic understanding of where you are starting from, where you are going, and what you are working with. It is necessary to start with what you are and why you are searching. If you do not know that basic ground, there is no point, because your ideas become mere fantasy.

Before we speak of liberation or freedom, we need to discuss the basis of the path, which is confusion. It is important to begin by considering the development of what in the Buddhist tradition is called “ego.” This may sound pejorative, but we do not have to be ashamed of what we are.  Although our background may not be particularly enlightened, peaceful, or intelligent, it is good enough. We can work with it. It is like plowing a furrow and planting seeds. So we are not trying to get rid of the ego, but simply acknowledge it and see it as it is.

In the development of ego, at the beginning there is basic ground, basic consciousness, open space. There is openness, freedom, and spaciousness all the time. For example, in everyday life, at the first moment we see an object, there is a sudden recognition without logic or conceptualization. We just perceive openness. But immediately we panic, and hurry to try to put something into that openness. We try to find a name or a pigeonhole so that we can locate and categorize that particular thing according to our own ideas and conceptualizations. As that process continues, the ego becomes more and more solid. However, the idea of ego as a solid ongoing entity is illusory; it is a mistaken belief. Although confused mind would like to view itself as solid, it is only a collection of tendencies and events. This collection is referred to as the five skandhas, or five “heaps”: form, feeling, perception/impulse, concept/formation, and consciousness.

Solidifying Space. In the beginning, there is open space belonging to no one, and within that space is primeval intelligence, or vidya, so there is both intelligence and space. It is like a completely open and spacious room in which you can dance about and not be afraid of knocking anything over. You are this space; you are one with it. But you become confused. Because it is so spacious, you begin to whirl and dance about. You become too active in the space.

As you dance, you want to experience the space more and more, to enjoy the dance and the openness. But at that point, space is no longer space, as such. It has become solid space because of your unnecessary urge to contact it. When you try to cling to space, to grasp it, the whole perspective is completely changed. You have solidified space and made it tangible. That sense of self-consciousness is the birth of duality. Spaciousness has become solid space, and you have begun to identify yourself with the “I.” You are identified with the duality of “I” and space, rather than being completely one with space. You have become self-conscious, conscious that “you” are dancing in space. This is the birth of the first skandha, the skandha of form.

Having solidified space, you forget what you have done. Suddenly there is a blackout, a gap. Your intelligence suddenly collapses, and you are completely overwhelmed by ignorance in a kind of reverse enlightenment experience. When you wake up, you become fascinated with your own creation, acting as if you had nothing to do with it, as though you yourself were not the creator of all this solidity. You deliberately ignore the openness and intelligence, so the intelligent, sharp, precise, flowing, and luminous quality of space becomes static. There is still primeval intelligence, or vidya, but it has been captured and solidified. Therefore, it has become avidya, or ignorance. That blackout of intelligence is the source of ego. From that sudden blackout, as you continue to explore, gradually things become more and more solid.

Three Stages of Ignorance. The skandha of form has three stages. The first stage, the birth of ignorance, is a kind of chemical reaction in which you come to the conclusion of your own separateness. It is as if there were a desert, simple and basic, but strangely and suddenly one of the grains of sand popped up and began to look around.

The second stage is called the ignorance born within. Having noticed that you are separate, you feel that you have always been so. However, that instinct toward self-consciousness is awkward. You feel unbalanced, so you try to secure your ground and create a shelter for yourself. You take the attitude that you are a confused and separate individual, and that is all there is to it.

Having managed to transform space into solidness, you would then like to possess it and grasp it. Having solidified the duality of self and other, you try to feel the qualities of that “other” in order to reassure yourself that you exist. You reach out to sense whether that “other” is seductive, threatening, or neutral. You think that if you can feel something “out there,” then you must really be here. The mechanism of feeling you set up is extremely efficient.

In the act of perception, having received information about the outside world from the skandha of feeling, you respond to that information in three ways: by drawing in, pushing away, or being indifferent. The skandha of feeling transmits its information, and you make judgments, you react. Whether you react for or against or indifferently is automatically determined by this bureaucracy of feeling and perception. If you find the situation threatening, you push it away; if you find it seductive, you draw it to you; if you find it neutral, you are indifferent. So perception/impulse is an automatic impulsive reaction to intuitive feeling.

The automatic reaction of the third skandha is not enough of a defense to protect your ignorance and guarantee your security. In order to protect and deceive yourself properly, you need intellect, the ability to name and categorize things.  With intellect, you can label things “good,” “bad,” “beautiful,” “ugly,” and so on.

With each of the skandhas, the structure of ego is gradually becoming heavier and stronger. Up to this point, ego’s development was purely based on action and reaction, but from this point on, the ego is becoming more sophisticated. You begin to experience intellectual speculation, to confirm and interpret yourself. The nature of intellect is quite logical, and your obvious tendency is to use that logic to create a positive condition for yourself. You use the intellect to confirm your experience, to interpret weakness as strength, to fabricate security, and to verify your ignorance. So although primordial intelligence is happening all the time, it is being employed by ignorance, by dualistic fixation.

The last stage of the development of ego is consciousness. Consciousness is an amalgamation of the intuitive intelligence of the skandha of feeling, the energy of the skandha of perception/impulse, and the intellectualization of the skandha of concept/formation. That combination produces thoughts and emotions. So at the level of the fifth skandha, we find emotional upheavals and the uncontrollable and illogical patterns of discursive thought. With the development of discursive thoughts and fantasies, the whole thing is completely secured.

The five skandhas present a complete picture of ego. According to Buddhist psychology, the ego is simply a collection of skandhas, or heaps – but actually there is no such thing as ego. It is a brilliant work of art, a project of the intellect, which says, “Let’s give all this a name. Let’s call it ‘I’.” That “I” is the label that unifies that disorganized and scattered process into one entity. It is very clever. 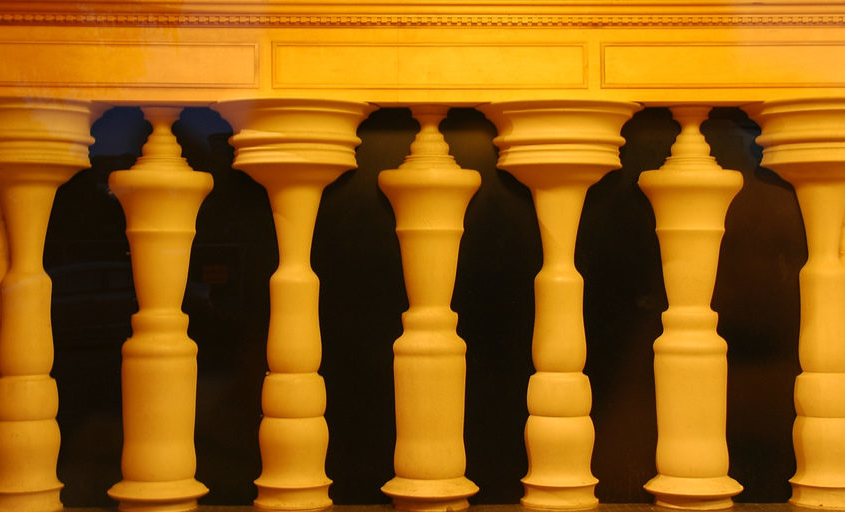