The story before ego begins at our birth, with openness and spaciousness: At birth, the human infant has no sense of self. He is Being. He is his being without knowledge or self-consciousness. Our most fundamental state of mind, before the creation of ego, is such that there is basic ground, basic consciousness, basic freedom, basic trust, open space. This is the natural resting state of the mind: open, fresh, alert, aware, and pure (unadulterated by conditioning).

Before our habitual mind begins to form or fixate, there is relaxed, open spaciousness; we have no sense of being separate from everything else. We experience pure wonderment and curiosity. We dance in the openness. You can see this in the eyes of infants.

But then there’s a moment when we realize “I’m here!” The memories of pain and pleasure begin to coalesce. A separate sense of self arises because we identify with our memories of pleasure and pain – we no longer remember we’re a part of everything else. This is the first skandha: form.

As you see with each skandha, there is a layering of defense mechanisms. There was, oh! I’m here, I’m separate. Now, there is a reacting to the world around us – is it for us, against us, or something I can ignore?

The third skandha is “Perception.” It’s not enough to decide if things are good, bad or neutral. The third skandha brings in intellect to name, categorize, organize, and conceptualize each and every thing in the world around us. That’s a desk, that’s a bed, that’s orange, this movie is dirty, that person is sinful, the sun is hot, etc., etc. We’re perceiving and naming everything around us to better get a fix on our place – or where we fit – in the midst of the phenominal universe. Like a submarine pinging device, we are constantly sizing up other things and people to confirm our existence in the world and our place in the hierarchy of the world as created by ego.

You can see how, as ego develops, we’re adding more and more concepts to our idea of the world. In the beginning, in spaciousness, there was very little if any concept of anything. Then in the first skandha, a huge concept appears called “me.” I appear: there is me, and there is world – that’s it. In the second skandha, there’s another layer of complexity: it’s not just me and world; it’s me, world, good, bad, I can ignore. In the 3rd skandha, we have an added layer of conceptualization. Now, we have names & categories. The world is crystalizing: more shape, more form, more specificity. Sense of self is responding by becoming even more solid.

The fourth skandha, is called “Mental Formations.” This refers to yet another layer of complexity and concept of defense mechanism. Here, we add an entangled flood of emotion and notions that are rich and charged with energy: we have emotional experiences.

You can see if our thoughts, words, and actions are habitually attached to the skandhas of ego, it could be very difficult to have a direct connection with relaxed spaciousness. We’re getting further and further away from our basic nature. We’re becoming so serious about things. This is why many people turn to meditation and other ways to work with themselves: because we feel trapped in the constant reactions of the skandhas: wanting, not wanting, ignoring, perceiving, naming, conceptualizing, and infusing strong emotion. This way of being is challenging, painful, and habituated.

The fifth and final skandha is called “Consciousness.” This skandha pulls all the other skandhas together to create a whole and real sense of self.

OK, so we begin with pure space, ego arises and, for the sake of feeling safe, ego creates a solid world out of what we see, hear, smell, taste, and feel. Then we live the rest of our lives in that way. A world of an illusory experience made purely by our ego.

Does that sound right to you?

As we learned and know: in that world there is pain, suffering, sickness, old age, and death with moments of joy.

What did we learn was the end to suffering? Can you venture a guess WHY meditation is the end of suffering? So which is the real world? Why?

We say the world of experience made by ego is empty. Why would we say that? Can we exist in both worlds?

We’ve lived in ego illusion all our lives and have figured ways to navigate through it til now. And we’re ok, for the most part – we’ve made it this far. AND we’re learning skills that can help us avoid the pain and suffering that is guaranteed in ego’s world by not getting hooked by desire, aversion, and ignorance.

Do we exist at all?

There is a beloved short sutra or scripture that talks about all of this and helps us remember the emptiness of the world of ego. And by doing so, compassion arises along with love for ourselves and all beings who are trapped in the same situation. It’s considered sacred because of its raw; therefore, it’s chanted daily by many. We will study this sutra in one of our future gatherings. 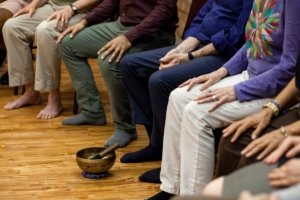 Beyond the Mundane Mind